Actress, singer, and comedian, Lyn Shakespeare is A One Woman Show! Entertaining, enthusiastic, and full of good vibrations, it’s impossible not to enjoy her company. And when Lyn told me she’d done stand-up comedy in Australia for several years, I was impressed. Because anyone who can make you laugh is magical. And powerful! 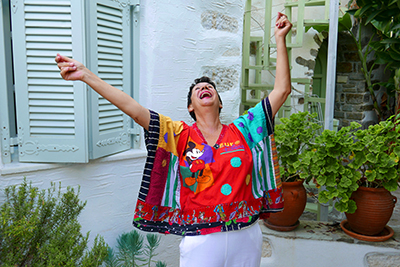 Laughter is good for your health, both mental and physical. Laughter helps release endorphins that transform a bad mood into a good one. Laughter also decreases stress hormones, lowers blood pressure, boosts immunity, and decreases pain. A comedian is almost like a doctor! 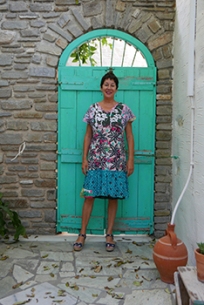 But whereas laughing can loosen you up, trying to make others laugh can make you tight. Because making people laugh is not always easy. Which is why Lyn is so amazing.

Petite and impish, Lyn reminds me of a young Judy Garland making me even more curious about her as a comedian. So I bombarded her with questions:

Q: When you did stand-up, what were your jokes based on? Did you make fun of yourself  or, like Joan Rivers, make fun of others? How did you come up with your material?

Lyn: I wrote a routine about growing up with the name Shakespeare. And over the years, this became a big part of my routine. I would steal jokes and rewrite them to make them mine.  A lot of my humour definitely belongs in the “gay” arena, which is where I have had my most successful and happiest of gigs. And where I can be totally outrageous .

I don’t like cruel comedy e.g. Joan Rivers, although she is as cruel about herself as she is on the public! I do remember a few times in the past “outing” people and thinking later on that I could have done better !!  And not have been sooooooo mean !! ( although they probably deserved it !! )

Observation of life is a great way to come up with comedy.  People that you meet along the way, who definitely need to be sent up !!! 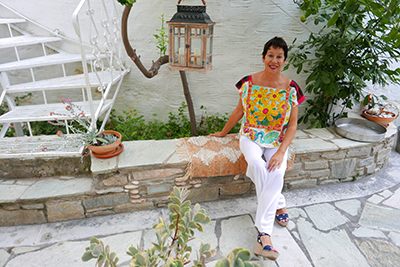 Q: What was the most difficult thing about doing stand-up?

Lyn:   After performing much cabaret and always with piano player,  I realized that stand-up is a lonely beast!!  Although when it was a brilliant night and you and the audience were “one”, it was the best  of nights.  I remember one of my first gigs was when I was dressed as Jessica Rabbit ( god knows why !! ) and it was just the worst gig and as I walked off stage, my microphone was still on and I said to the stage manager “The audience hates me !! “ and then I heard the audience roar with laughter.  They had all heard my comment. Accidental humour !!

Q:  Give a brief description of going to the Oscars.

Lyn: My dear friend, Mr. Cha Cha, choreographer for the films Moulin Rouge, Strictly Ballroom, Romeo and Juliet, and many others, had been asked to choreograph two numbers from the film Enchanted which he had choreographed as well.  He had 2 tickets  for the Oscars so I told him I was going with him!!! And, hoping to use the experience for a future skit, I wrote about our L.A. journey: Getting Ready for the Oscars, Walking the Red Carpet, Watching The Oscars, The Governor’s Ball.  The Mayhem, The Madness, The Glamour, The Scary Faces, The Amazing Night of Nights! 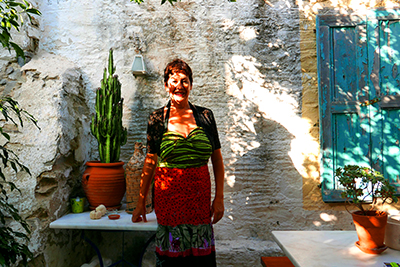 Lyn: The easiest of all questions. I love them. They are so theatrical. They are all individual pieces. They  are born from recycled fabrics. They are so much fun. They are created with LOVE. 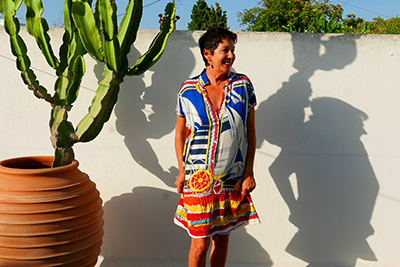 The  photos of Lyn wearing Muy Marcottage dresses were taken on Paros by the photographer Chiara Pilar. 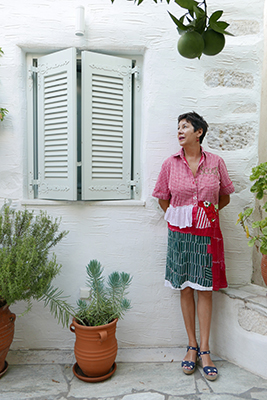