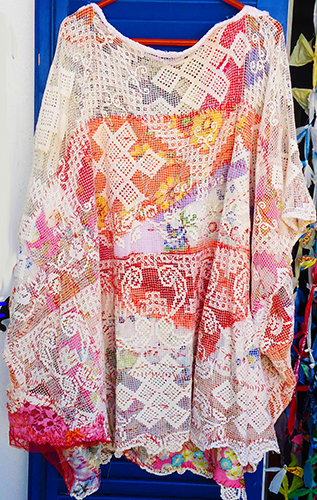 huipil dress made from recycled tablecloth and patchworked fabric

There was this big white space above the stairs leading to the bedroom that used to stare at me.  I couldn’t stand the glare so I decided to stare back by creating a home gallery and had three rows of picture shelves put on it. To enclose the area, I painted it orange.  When it’s finished, I’ll call my little gallery Ikastikos(εικαστικός) which in Greek means “representative” thus a word often related to the visual arts.

Obviously, the shelves need something special so I decided to make Greek retablos.  That is, drawings that express an appreciation and expressed in Greek since we’re on Paros.  Of course, I needed the help of my Greek teacher, Katerina.

Retablos are small ex-voto paintings (generally painted on tin) made as an offering of gratitude for an answered prayer. It’s all about the  Aesthetics of Appreciaton: If you’re lucky and don’t know it, it’s like not being lucky at all. So to keep luck alive, it must be recognized. And retablos are a means of offering thanks for this luck.

Having many things to be grateful for, several years ago I made a series of cardboard retablos. They were so joyful to make. Because expressing gratitude is good for your health.  It makes you more optimistic, keeps you from always rocketing around only yourself, and, if you think about what you have to be thankful for when you go to bed, helps you sleep better.  In other words, gratitude detoxes and fortifies the spirit.

So, for my Greek retablos, I made a list of 15 things in my life worth appreciating.  One of those was about a dress. More than a dress, it’s a long huipil and so very special because it was one of three El Suavecito brought me from Mexico. On the front of the huipil are two big embroidered birds.  They are quite lovely and not something you would normally see on Paros. So often people stare at me when I wear it. Obviously I am happy to have this magical dress but the real gratitude is directed towards El Sauvecito who loved me enough to give me something he knew would give me much pleasure. Everytime I wear the huipil, I think about him. 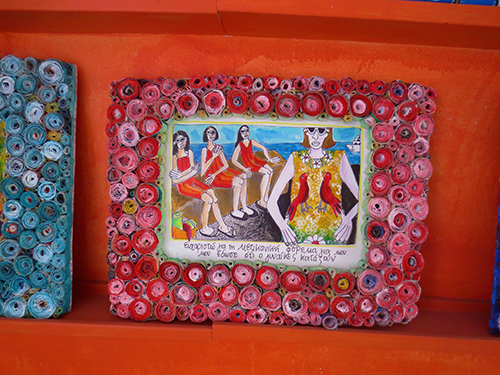 All the Greek retablo drawings are mounted on discarded cardboard.  The frames are made from junk paper rolled into rounds glued together thus ecological as well. Because in my heart there’s constant gratitude for nature that keeps us all alive.

Janet Cooper is an extraordinary woman. Artist and world traveller, Janet collects no dust! Below are fotos of her wearing the Muy Marcottage dress “Enjambment” worn during her various travels including to the Easter Islands, Palermo, Valencia, Japan, El Camino de Santiago, and New York. 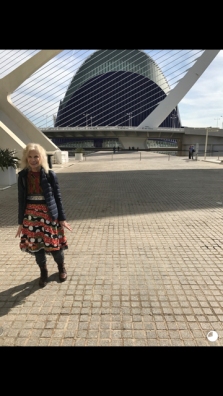 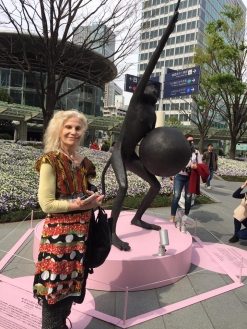 Janet visiting Studio Los Ojos in Rome wearing a hat she created herself.

Below is a post about Janet reblogged from ART FOR HOUSEWIVES blog in 2013.

Janet Cooper is a friend and one of my favorite artists. She also owns the Muy Marcottage dress “Enjambment” and gave me a thrill by having herself photographed in the dress in various situations.  Scroll below to see some of these fotos. 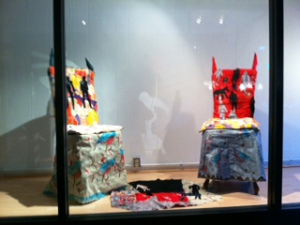 Janet At the MOMA Opening for the Quay Bros Exhibit  (Janet loves hats!) 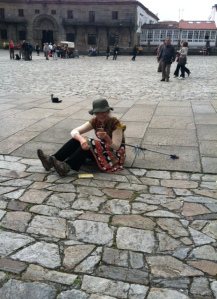 The term “enjambment” is a literary term.  It indicates a line in poetry that continues going on beyond a line-break thus, in a certain way, goes beyond its boundaries.  Just… 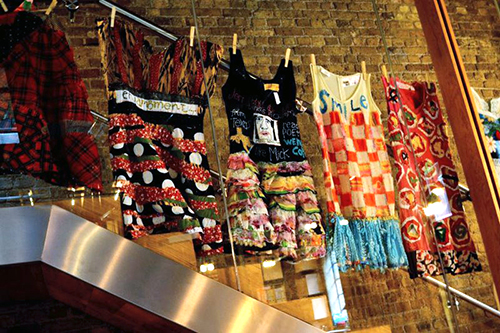 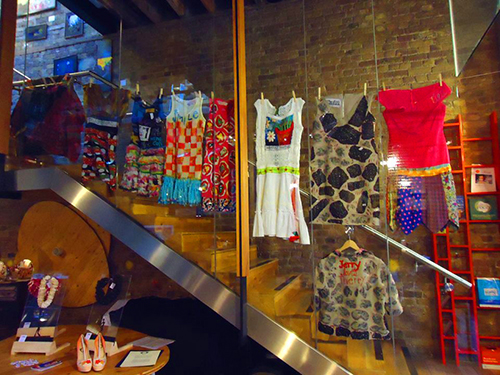 Muy Marcottage with Eco Pink at the London Design Festival 2011

While sewing on this dress, for some unknown reason, I thought about Lily Bart.

Many years ago, I accompanied my daughter to Aix-in-Provence for a language course.  My reading companion was Edith Wharton’s THE HOUSE OF MIRTH.  Published in 1905, the book gets its title from Ecclesiastes 7:4: The heart of the wise is in the house of mourning; but the heart of fools is in the house of mirth.

The protagonist is Lily Bart, 29 and unmarried. Lily will not marry the man she really loves because he is not rich thus dedicates her time trying to find a wealthy husband.  Unfortunately, Lily sabotages all of her possibilities for marriage as she unwittingly gets involved in a scandal that will eternally ruin her. 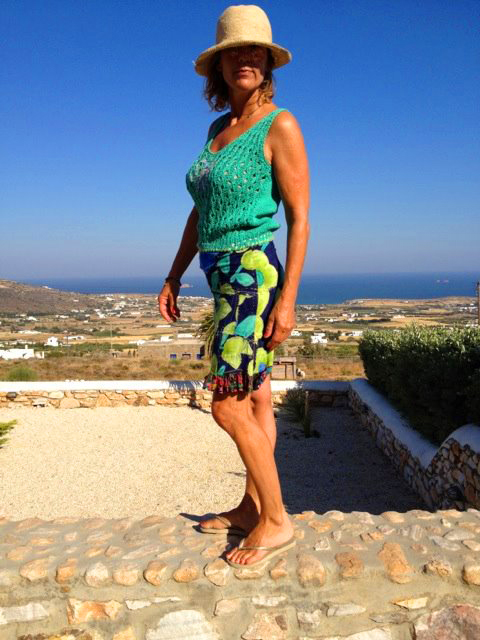 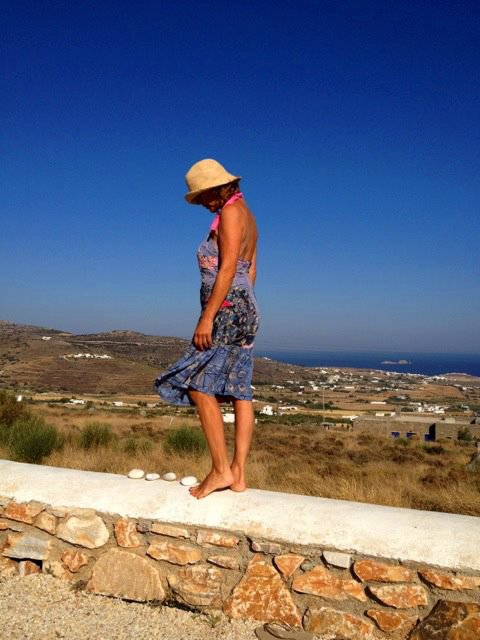 with the Aegean sea in the background, Carine wearing “Sigh” Muy Marcottage dress…some people make you sigh, some do not 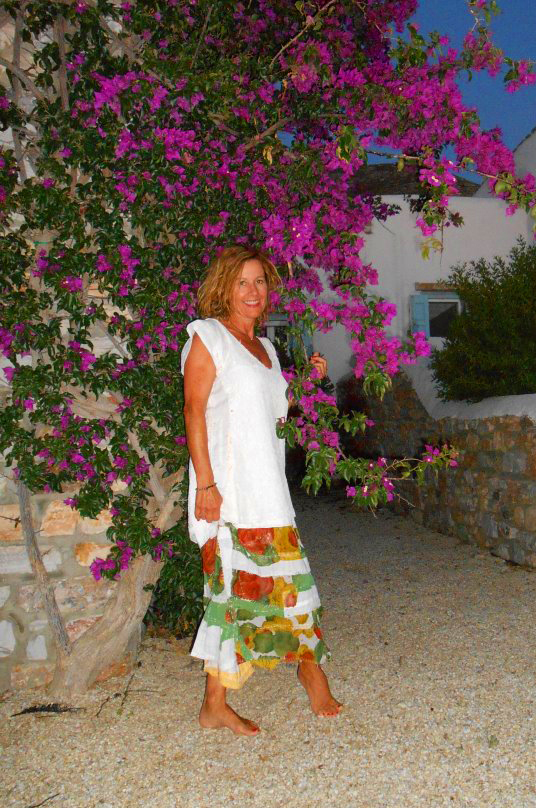 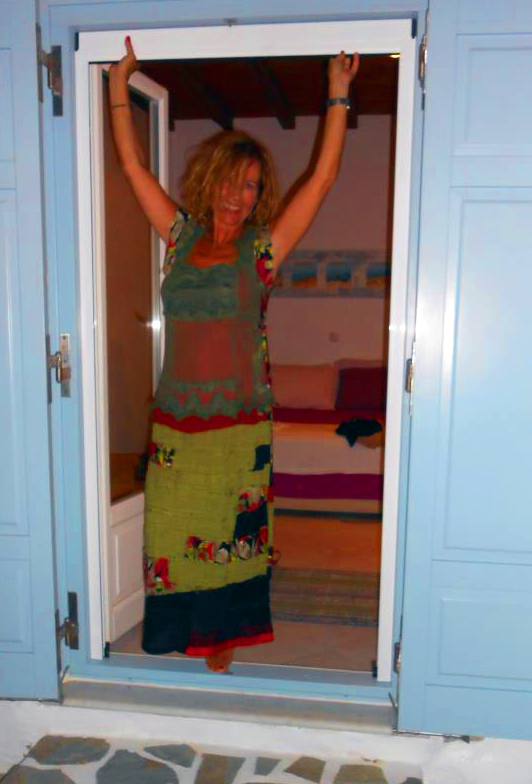 Claire McCardell (1905-1958) was a designer who also took the Occam’s Razor approach to creating clothes in large part because of  the WWII imposed parsimony. Using limitation as a source of inspiration, Claire created designs meant to make the most out of a little. She used “alternative” fabrics such as denim and wool jersey and surplus government weather balloon cotton for her creations.  And the shortage of leather led to Claire’s making ballerina flats popular.

With the war, women had to assume a chores generally done by men as the men were busy being soldiers.   No longer objects but, instead, sheer animation, women needed clothing that was practical and easy to move in.  Claire may have been influenced, when studying in Paris, by Coco Channel’s desire to liberate women shackled by fashion.

Claire, often referred to as the High Priestess of the Understatement, said she designed things that she needed for herself but, it seemed, others needed, too.  She strove for simplicity and created mix ‘n match garments that could extend a wardrobe with the leitmotif of  functional and affordable.

Claire revolutionized American fashion via some of the following designs: 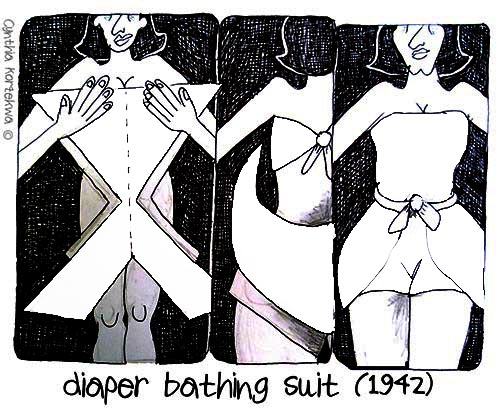 Popover Dress (1942) which was a wrap-around dress including an attached pot holder for those women who had guests for dinner and thus had to run back and forth from the kitchen.

A wrap dress was versatile in that it could be used as a house dress, party dress, dressing gown and even as a bathing suit cover up. 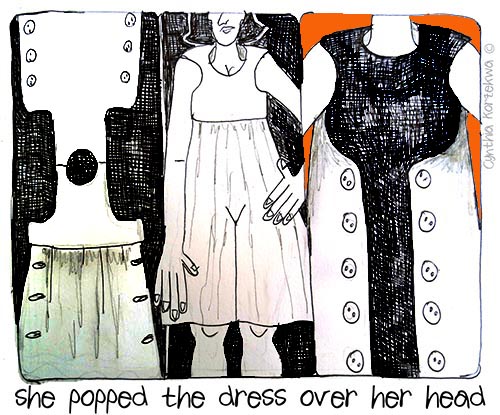 For the Mayans, a huipil created a sacred enclosure for a woman’s body. And, when she entered her garment by pulling it over her head, the woman became the axis of her universe. Popover dresses also permit the woman to be the axis.

The Future Dress made from triangular pieces of fabric. 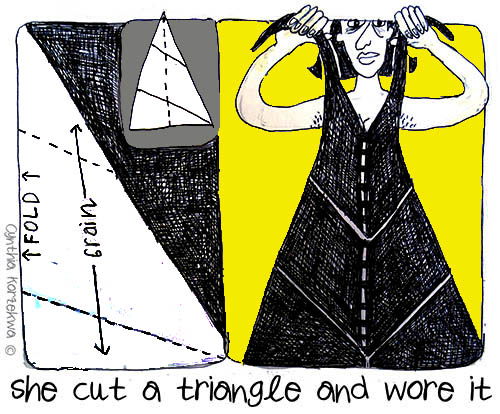 Shoulder Shrugs are easy to fold and easy to wear (1947). 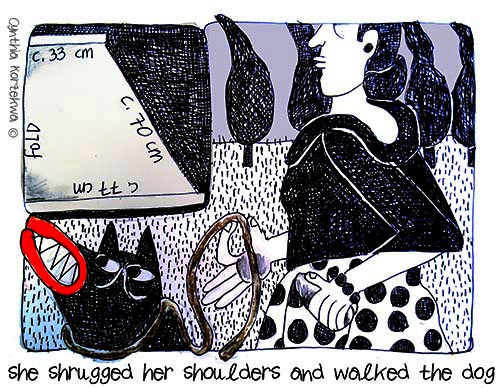 Claire collaborated with artists such as Picasso, Chagall, Milo, Leger using fabrics designed by them for her creations. For her  “Fish Dress”, she used Picasso’s ‘Fish Print’ fabric (1955).  Thus something designed by Picasso could be bought by the yard. The artist didn’t mind commercializing his art.  However, Picasso refused to have his designs used for upholstery fabric.  It was one thing to be worn but something totally unacceptable to have his art used for sofas thus be sat upon.

Huipil dresses to make inspired by Claire include the halter top dress and the Grecian tunic dress.

Bibliography:   McCardell, Claire. What Shall I Wear? . The Overlook Press.New York. 2012